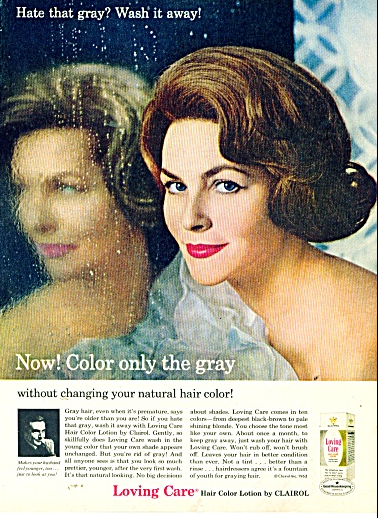 Twofer — Loving Care gets hubby into the act in 1963. He’s that fellow lower left with the bags under his eyes and the rewarding caption: “Makes your husband feel younger too…just to look at you!” Where was “Mad Men’s” Peggy Olson when we needed her pointed pen!!

Did you get the news flash? Researchers from the UK and Germany report that people’s hair goes gray because of massive oxidative stress caused by a build up of hydrogen peroxide in hair follicles which causes hair to bleach itself from the inside out. Now here’s the thing, these scientific types say that this massive build up of hydrogen peroxide can be reversed with a UVB-activated compound called PC-KUS. I won’t bore you with the details cause I don’t understand them, never having excelled in the lab.

The question is will this so-called cure (when and if it makes it to the marketplace) send those who have been wedded to their colorists for years fleeing? Who knows.

I stopped “streaking/high-lighting” my hair 7 or 8 years ago. Enough already with the chemicals, the $$$ outlay. To rest my case: In 1958, Marilyn Monroe’s hair was “falling out from overbleaching and overperming,” comes the news from Kenneth Battelle’s obituary which ran in today’s New York Times. During the Loving Care Era, Kenneth, as this Count of Coiffeurs was known, had the A++ list of clients including Jacqueline Kennedy. He fixed Marilyn’s tresses, the obit reveals,  by “restoring their soft luster.” I guess with softer chemicals? But I digress.

I see gray as another kind of lightening up. It can’t come in fast enough for me. The reddish-brown thing works for my brother, 69, also practically gray-less. But on me it’s just dullsville.

I gravitate to the hair care aisle in the drugstore looking for some potion (chemical-free!) not to color the gray, wash it away, but to enhance it. Heads shake when I reveal my mission, eye brows arch in surprise with a look that says what a misguided soul.

For some, staying gray means letting go of one more chore: that visit to the colorist. Others like the “authoritative” message it conveys or the realness of it. I cringe when I see hair color that shouts sham, pale unnatural shades or those lifeless coal black helmets.

Earlier this year, the photographer Vicki Topaz, in her mid-sixties, had an exhibit of her work featuring portraits of graying women. “Silver: a State of Mind” was viewable at the Buck Institute for Research on Aging in Novato, CA. “These are women who have fun,”  Topaz told The New York Times. “They’re confident and at ease with being who they are.” Works for me.

Postscript…So, we’re sitting at dinner the other night and Jack says, “Are you streaking your hair again?” After I picked myself off the floor, I said no. “Yes, you are,” he says not convinced that I was being my truthful self. “I can see the blonde.” My gray was passing for blonde! Yes! Of course, this coming from a man who never knows I’ve been to the hairdresser. “Looks the same to me,” is the refrain post every visit to the coif cutter. Go figure.