Some of the “Great Books” which fire “the desire to know” at St. John’s College

I had never heard of St. John’s College (not to be confused with St. John’s University of Queens, NY, that is often tied to collegiate basketball’s March Madness). This St. John’s is in Annapolis and Santa Fe. Recently, its President, Christopher B. Nelson appeared on The New York Times Opinion page. In a Letter to the Editor, Nelson responded to a David Brooks column.
Among other things, the column lamented the absence of a kind of intellectual communion between people – “the whole Great Books/Big Ideas thing.” “David Brooks asks how many schools prepare their students for a passionate intellectual and emotional life,” Nelson wrote, telling us that as “the first ‘Great Books’ college, St. John’s (East and West) has been doing nothing but this for the last 76 years.”

So, how do we define “Great Books?” For St. John’s, they make up a curriculum consisting only of “original sources,” as Nelson’s March 11th blog, “Original Sources of Thought,” points out: “From Homer to Heisenberg (as in “Breaking Bad”), Plato to Planck, Euclid to Wittgenstein, Thucydides to Tolstoy – we study the actual works composed by foundational thinkers.” It’s a daunting group. “We study these original and timeless sources because they are in fact the grounding of all modern thought,” Nelson explains. “Grappling” with them, he continues, “will make a student better prepared to deal with the ideas of contemporary life.” Definitely food for thought. I wish I could experience any of St. John’s Seminars, just to listen to students and teachers navigate the intellectual mazes constructed by these influential thinkers. 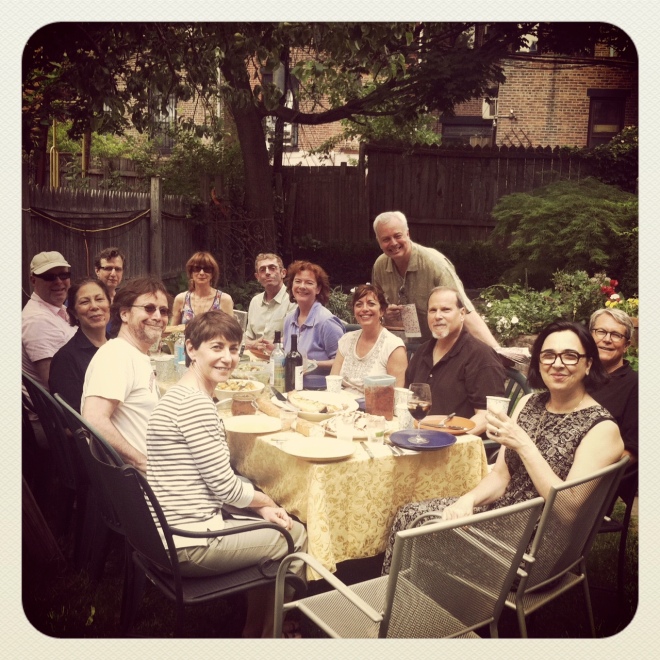 Alas, that is not an option. BUT what I do have, and it is not a shabby literary substitute, is my New York Book Group. Oh, what a grand meeting of the minds, all with I.Q.s vastly superior to mine. We are not into “intensive Greek studies” as St. John’s freshmen are, but this is the college English class I never had: One filled with stimulating – and often humorous – discussions, conflicting and unpredictable viewpoints (all the more juicy than a consensus). You LEARN, and leave mulling over pithy opinions, hungering for more.

Speaking of books, let’s revisit an author to whom many would attach the label Great: Philip Roth. Recently, Roth sparked a bit of controversy in the Opinion pages of The Times. In her piece, “English Class With Mr. Roth,” Lisa Scottoline remembers one Roth-taught seminar from her English 275 class at the University of Pennsylvania in the ’70s. He never looked at his notes, nor did he leave any comments on the papers he graded, according to Scottoline. “We all wanted him to tell us how to write,” she remembers, but “by withholding his own personality, thoughts and opinions, he forced us back on our own personalities, thoughts and opinions. He made us discover what we wanted to write about, and to write about it the way we wanted to.
“The best advice you can give to any writer is to find her own voice. He knew he couldn’t tell us that, but like any great writer, he showed us.”
Responding to Scottoline’s “praise” for Roth’s teaching method, Nicolaus Mills, a professor of American Studies at Sarah Lawrence, noted in his Letter to the Editor: “The essence of a seminar is that it is a shared exploration with an experienced guide who, for one thing, comments on a student’s paper, noting its “virtues and defects.”
I would need that feedback, but what student wouldn’t take away something from Roth’s teaching-at-a-distance style? To this day, Scottoline remembers that Roth loved a particular line from “Madame Bovary: “She was just eating a maraschino ice that she held with her left hand in a silver-gilt cup, her eyes half-closed, and the spoon between her teeth.” Doesn’t that speak volumes.

Mad Man at Work — Don Draper, on the job, turning the pages of Philip Roth’s “Portnoy’s Complaint” in a recent episode of “Mad Men”