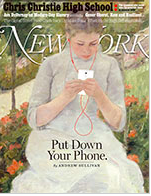 Years ago I did a school paper on the 19th century artist Mary Cassatt. I remember the laborious job of researching, hunting down tidbits in the library. Alas, no internet to speed the project along. So, I was taken by New York magazine’s clever interpretation of Cassatt’s “Girl in the Garden,” 1880-82, on the cover of its September 19-October 2 issue (above). This girl is not contemplating the botanical wonders around her, but intently studying her iPhone, EarPods firmly planted to drown out any bird tweets or other natural sounds found in such a setting.

The visual is perfect for illustrating Andrew Sullivan’s story, “I Used to Be a Human Being.” As a pull-out for the story notes: “An endless bombardment of news and gossip and images has rendered us manic information addicts. It broke me. It might break you, too.”

Inside the magazine, the altered paintings are just as eye-catching. Take Edouard Manet’s “Le déjeuner sur l’Herbe,”1863 (above), where one of the picnic diners takes a photo with his iPhone of the couple he is with; or the depressing portrait depicted in Edward Hopper’s “Hotel Room,” 1931 (below). Here, a lonely woman types out a text.

Read the story, even if you have to do it on an iPhone.

Then I came across a book review with quotes from the book describing the person in the book’s title. I found the quotes hauntingly familiar. It sure sounded like the book’s author could be talking about traits found in one of our Presidential candidates.

For instance, the title character is…
“a rabble-rouser” – regarded by many as a self-obsessed “clown” with a strangely “scattershot, impulsive style.”

“He is often described in the book as an egomaniac who ‘only loved himself.’ “

“His manic speeches and penchant for taking all-or-nothing risks raised questions about his capacity for self-control even his sanity.”

He is described by someone quoted in the book as a “swamp of lies, distortions, innuendoes, half-truths and real facts.”

“He peppered his speeches with coarse phrases and put-downs of hecklers..and offered himself as the visionary leader who could restore law and order.”

He ” ‘promised to lead (his country) to a new era of national greatness,’ though he was typically vague about his actual plans.”

The recently-published book is by the historian Volker Ullrich and tells the story of “how a ‘most unlikely pretender to high state office’ achieved absolute power in a once democratic country and set it on a course of monstrous horror.”